Changes in Prevalence and Clinical Characteristics of Cervical Cancer in the People’s Republic of China: A Study of 10,012 Cases From a Nationwide Working Group

Since the 1980s, extended hysterectomy has been performed more frequently in the U.S., whereas the use of radiation alone has substantially decreased. It recently became generally accepted that concomitant chemoradiotherapy represents the standard of care for patients with stage IB2andhigher cervical cancer in the U.S.; however, radiotherapy is still the mainstay of treatment for advanced cervical cancer in many countries. Despite the acceptable outcomes, critical reviews of long-term survivors have highlighted the prevalence of women suffering from increased menopausal symptoms, depression, and sexual dysfunctions after radiotherapy. In addition, the recent emphasis on chemotherapeutic strategies has shown improved outcomes relating to neoadjuvant and postoperative chemotherapy.

Invasive cervical cancer cases (n=10,012; based on hospital data) from 2000 to 2009 were identified from this database, which was established by the Chinese Gynecological Oncology Study working group (ClinicalTrials.gov identifier NCT01267851) and included multihospital collaboration. This study protocol was reviewed by the ethics committee of Tongji Hospital, Tongji Medical College, Huazhong University of Science and Technology, People’s Republic of China.

Earlier reports describe details of the data sources and methods used for this analysis. Briefly, data were collected from patient files and automated systems by trained gynecological oncology staff using standardized data collection and quality-control procedures. Collected data included demographic and clinical details, parity, age at diagnosis, FIGO stage, histological type, tumor size, treatment modalities, physical examination, histopathology tests, and chemistry profiles. Counties were categorized as “urban” or “rural,” according to the2011Statistics of Zoning Codes and Rural-Urban Continuum Codes formulated by the Chinese National Bureau of Statistics. All cases were restaged by two trained gynecological oncologists according to FIGO criteria (revised 2009). Tumor size was evaluated using magnetic resonance imaging, computed tomography, or ultrasound, and the maximum diameter was recorded. The diagnosis was confirmed by two pathologists who performed a formal review of the pathologic materials. Follow-up examination for all patients was suggested to be every 3 months for the first year and every 6 months for the next 4 years. In our database, follow-up was not feasible for a small proportion of patients because of loss of contact, and these data were excluded from the survival analysis.

We analyzed in detail the distributions and proportions of demographic and clinical characteristics, such as place of residence, parity, tumor size, and pathological factors. These characteristics were further stratified by age, region, FIGO stage, and histological type and were compared using the Pearson’s chi-square test or Fisher’s exact test. The Kaplan-Meier method was used to calculate 5-year disease-free survival (DFS) and overall survival (OS) rates. The log-rank test was used to compare survival curves. Statistical analyses were performed using the SPSS 13.0 software package (IBM Corp., Armonk, NY, http://www-01.ibm.com/software/analytics/spss/). Values are presented as percentages and mean plus or minus standard deviation. A p value of <.05 was considered significant.

Regarding regional distribution, 59.5% of cervical cancer patients came from rural areas, and a comparatively lower percentage came from urban regions (37.2%; Table 1). The mean age at diagnosis among rural patients(44.8±9.4years)was higher than that of urban patients (44.3±10.1years;p=.035).Peak cervical cancer rates were observed in rural patients aged 45.9 years and in urban patients aged 44.2 years (Fig. 1). 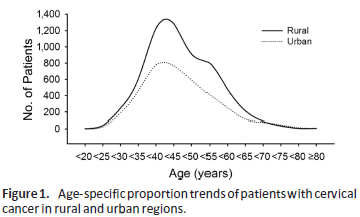 More than half of all cervical cancer patients (57.2%) were diagnosed as stage I, 34.0% were diagnosed as stage II, and only 3.6% and 0.6% of patients were stages III and IV, respectively (Table 2). The percentages of stage I cases were much higher among younger patients (aged ≤35 years and 36–45 years) compared with patients aged＞45 years (70.9% and 65.5% vs. 44.3%, respectively). Compared with the clinical stage distribution of cervical cancer in the People’s Republic of China before 2000, the proportion of early stage (especially stage I) increased over the past10years (Table 3).The most frequent histological subtype was squamous cell carcinoma (SqCC; 88.0%); adenocarcinomas (ACs) and adenosquamous carcinomas (ASCs) were found in 9.1% of cases, and small cell carcinoma of the cervix (SCCC) was found in only 0.3%. 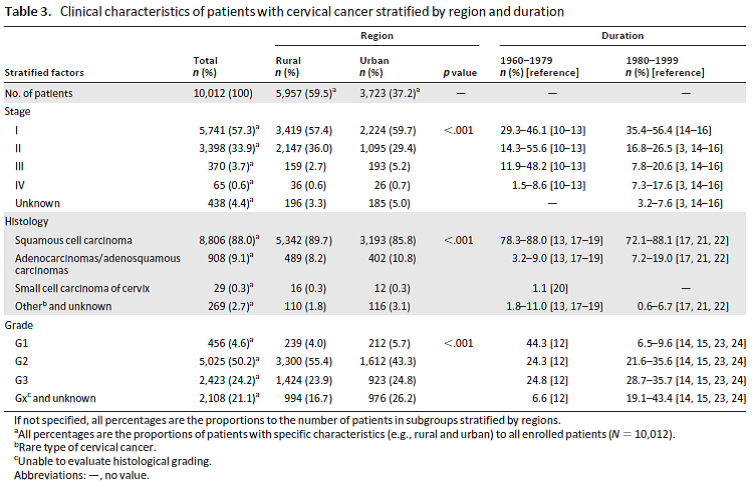 Alteration of the Therapeutic Modality

As shown in Figure 2, the 5-year OS and DFS rates of patients with cervical cancer were 84.4% and 82.7%, respectively (Fig. 2A, 2B).The 5-year OS rate was higher in urban patients than in rural patients (87.1% vs. 83.2%;p＜.001; Fig. 2C);we found no significant differences in the 5-year DFS rates between these two groups(84.3%vs.82.4%;p=.079; Fig. 2D).The5-yearDFS and OS rates of cervical cancer patients were significantly decreased with increasing age (Fig. 2E, 2F; p ＜ .001) and stage (Fig. 2G, 2H; p ＜ .001). Among three groups stratified by histology, patients with SqCC had significantly higher 5-year DFS and OS rates when compared with those in the other two groups (Fig. 2I, 1J; p ＜ .001). The data showed no significant differences in the long-term survival rates between patients with ovarian preservation and patients with bilateral oophorectomy (supplemental online Fig. 1; p＞.05).

Many European countries have reported increased rates of ACs and ASCs by at least 3% per annum, particularly among young women in the 1990s. The increase in ACs and ASCs was noted mainly in earlier studies, whereas stable or declining trends have been reported in many countries in later studies (Table 3). We found no apparent increases in the proportions of ACs and ASCs or SCCC in this study.

The data in this study show remarkable evidence of a high surgical rate (83.9%) in cervical cancer patients over the past 10 years, much higher than the rates from 1960 to 1979 (29.7%–32.9%) and from 1980 to 2000 (45.8%– 64.9%; Table 3). This change may be related to the increasing proportion of early stage patients and more well-trained, skilled surgeons. To date, the FIGO staging of carcinoma of the cervix has remained largely a clinical evaluation because surgery often cannot be performed in low-resource countries. In fact, surgical treatment was performed for most patients worldwide in the past decade. The definitive evidence of high surgical rate in our study suggests that surgical staging will be standardized because it is more accurate than clinical staging. In addition, chemotherapy has become an important treatment option for cervical cancer. Before 1980, radiotherapy was almost the only choice for cervical cancer patients if high-risk pathological factors were found after operation (Table 3). From 1980 to 1999, a small number of patients with cervical cancer began to receive adjuvant chemotherapy. Moreover, 16.7% of patients with stage I and 29.6% with stage II disease were treated with adjuvant chemotherapy instead of radiotherapy after 2000. The present data show that over the past 10 years in the People’s Republic of China, surgery has become the dominant treatment method, commonly combined with adjuvant chemotherapy for patients with stage I or II cervical cancer.

Over time, patterns of care have changed, along with variations in demographic and clinical features of cervical cancer, to match the increasing requirements for quality of life. The increased proportion of younger patients and earlier disease stage over the past decade has led to increased emphasis on preserving genital and endocrine functions. Neoadjuvant chemotherapy and conservative surgical approaches provide patients with opportunities to preserve genital function and even to potentially have babies. In our study, most of these patients were younger or in earlier disease stages, and long-term outcomes indicated that ovarian preservation did not reduce the survival rates in cervical cancer patients. Our previous studyfounda1.2% rate of ovarian metastasis in patients with cervical cancer, and ovarian metastasis was identified mainly in patients with special histological types, such as small cell carcinoma. These findings indicate that it is acceptable to consider treatments that accommodate the strong desire for genital organ preservation to meet the higher quality of life requirements of selected patients with cervical cancer.